Getting on the wrong side of cyclists

Should Belfast’s new cycling infrastructure be fully separated from general traffic on the busiest roads? Are kerbs and painted surfaces enough, or should bollards be deployed – and if so, how should they be spaced? Can we simply rely on drivers to obey traffic rules or is it better to design out bad behaviour and the need for costly enforcement?

These are some of the questions which the Department for Infrastructure (DfI) are wrestling with as they continue to roll out a new generation of cycle routes ahead of 2017’s Belfast Bicycle Network Plan. One existing cycle track on Victoria Street offers some key lessons, and poses questions of the Department’s willingness to act on safety concerns.

Belfast’s ‘noughties’ generation of cycling infrastructure was marked by a mish-mash of styles and priorities indicative of both scant resources and cultural resistance within the former Roads Service (now Transport NI (TNI), the executive agency of DfI, responsible for implementing road schemes). Great on-road separated facilities such as the Stranmillis Embankment were.. well.. that was about the only one.

Whatever cycling ‘infrastructure’ that got rolled out across the city was either badged-up (and inappropriate) footways, or dreaded, useless and mocked advisory cycle lanes.

Genuinely interesting experiments with separation tended to be on a small-scale such as the Bin Lane on Upper Arthur Street. Kerb separation didn’t stop determined drivers from unlawfully blocking that cycle track, and (in this era of the DfI/TNI Cycling Unit) a new approach is being tried with wand separation (more on that soon).

Another approach was more in line with the one-way style of cycle track seen around Copenhagen. It keeps cycling space distinct from the road and footways at different levels, but no other physical separation between general traffic and those cycling.

This was the vision for a short stretch of Victoria Street, as a way to link journeys coming from the NCN Route 9 / 93 at the Waterfront – a traffic-free route running for around 20 miles between Newtownabbey and Lisburn – into the city centre. Where it differs from the general implementation in Copenhagen is that it was designed for cycling journeys running against the flow of traffic – a contra-flow cycle track. It was something new for the city, and couldn’t have been visually clearer that it was intended for bicycle use only. 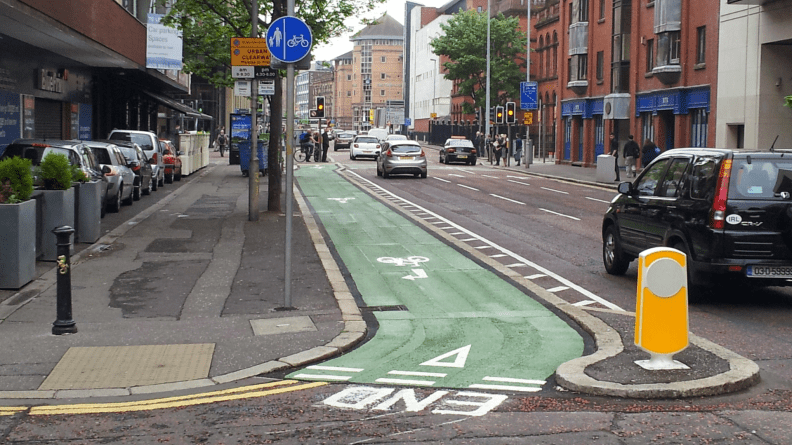 It also seemed slightly radical for Belfast in that the road was reduced from four lanes to three to accommodate cycling. But to call it “road space reallocation” would be going too far – the loss of the fourth traffic lane to an underground car park entrance to Victoria Square across the Chichester Street junction made this road space less functional. And the three on-street parking bays which the cycle track replaced meant flowing traffic was unable to use this lane for most of the day.

But as the images above show, the footway was regularly utilised as a ‘grey-area’ car park – neither pay-and-display nor entirely allowed. Google Streetview’s archives show the scale of the ‘culture’ of footway parking here:

In an area with such high parking demand, leaving areas of open public space to the whims of drivers was never a sustainable policy. The cycle track had the accidental effect of removing a line on on-road parked cars, making it easier for people to drive their cars up onto the footway. Realising this, a solution was sought prevent anti-social parking altogether – separation bollards (or “wands”). 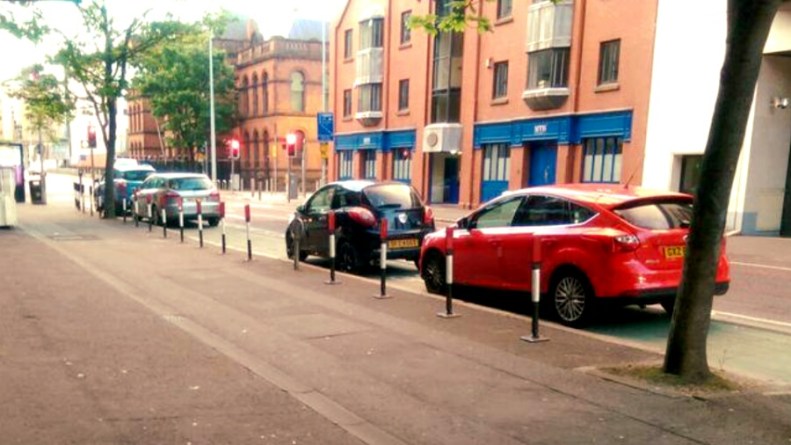 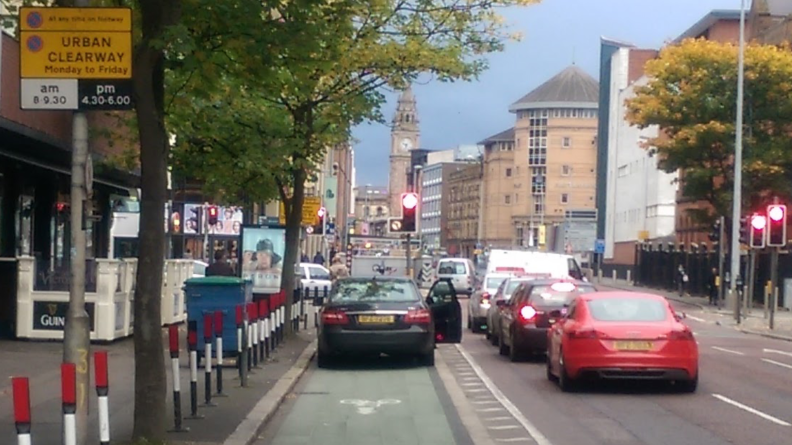 While this seemed to be a clear improvement for pedestrian safety, illicit parking was now concentrated on the cycle track.

The Victoria Street cycle track is classed as a mandatory cycle lane, which carries specific rules:

Contravention code 49 may be used for vehicles seen to be parked [wholly or partly] on a mandatory cycle lane. No observation period will be applied.

Traffic attendants may only enforce mandatory cycle lanes. These are at carriageway (road) level and are separated from the rest of the carriageway by a solid white line or by a raised traffic island.

Vehicles are not permitted to park on mandatory cycle lanes with the following exemptions:

But that’s not quite helping in real life.

These cycle tracks seems to work in Denmark, so why not in Belfast? Lack of cycling culture? Low cycling levels? Whatever the reason, the Victoria Street track ends up as an informal car park for too long to make it safe space for cycling.

It’s the height of daftness that when the opportunity presented itself to TNI to protect all vulnerable users on this part of the street, the cycle track was left exposed. People who cycle here might think they’re the butt of a bad joke, but the punchline was even better – drivers can still access and park on the footway. 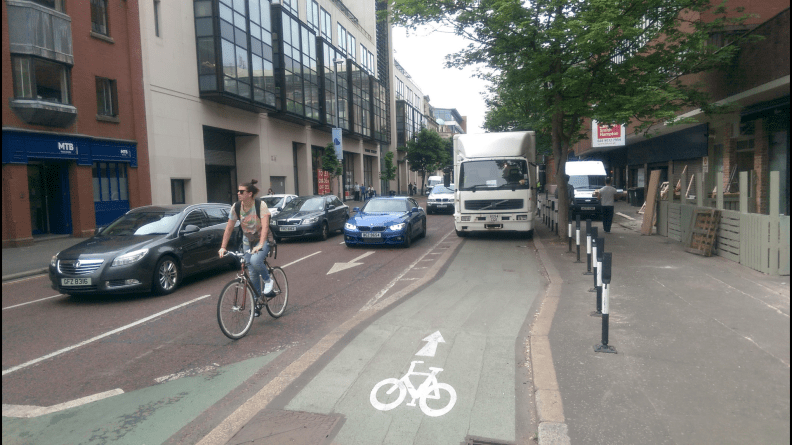 Remember that TNI designed this to be a contra-flow lane (although it’s two-way in practice) so that anyone cycling as intended who meets a blocking vehicle has two choices – dismount and walk on the footway, or take to the road against the traffic. 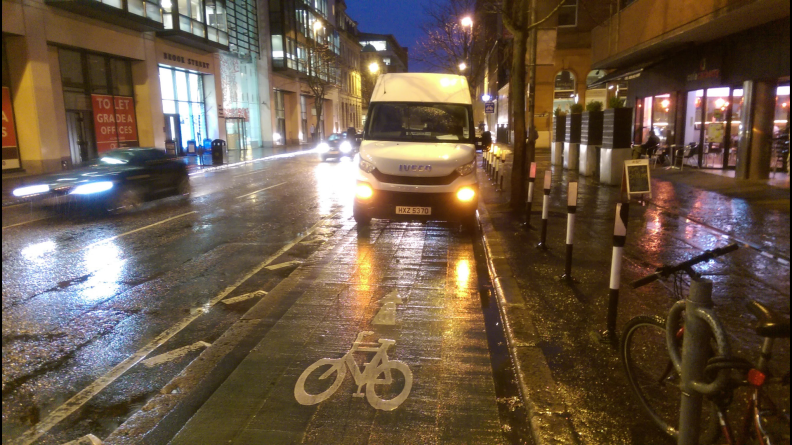 Neither option is particularly attractive or even practical with a cargo bike or kids’ trailer. In fact, it’s absolutely lethal given that commercial vans on delivery runs dominate the blockages during weekdays:

How often do vehicles block this lane? A Traffic Watch NI camera broadcasts a live image of this exact spot, which allowed a time-lapse capture of the problem over two weeks in October 2016 (each frame is snapped at a five minute interval):

As the cameras demonstrate, usage of the cycle track by vehicles is regular – sometimes for sustained periods – and the footway behind is (somehow, still) fair game. This hasn’t been helped by the strange disappearance of some wands. 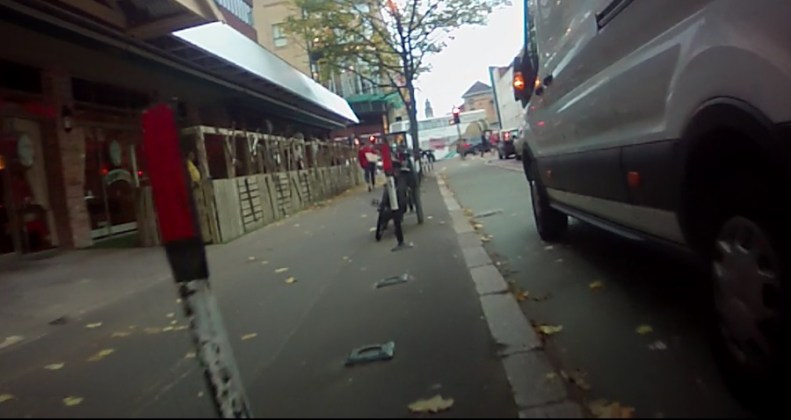 In July 2015 a Department for Regional Development (now DfI) statement on problems with the cycle track acknowledged the wand placement wasn’t working, but cited a lack of budget to enable the obvious fix:

“The wands were introduced because of car parking on the footway. It was anticipated that with the other markings, and the green surface of the cycle track, it would be pretty apparent that the space was not intended for vehicles. However I would have to agree with you that some parking is taking place.

“A second line of wands could be considered behind the kerb between the cycle track and the nearside running lane. In any case we currently have no budget for such works.”
DRD response July 2o15

Adding another line of wands is the last thing we need to be cluttering the street with. But moving the wand line over to the road side of the cycle track seems to be the only sensible move.

It’s only necessary because drivers seem determined to use the space, to the detriment of others’ safety. Making things “pretty apparent” to road users isn’t much of a deterrent. Enforcement and the likelihood of being caught could be, but it seems a lot of people are prepared to take the risk for the reward of a handy spot of free parking.

Enforcement is patchy, and at any rate costs public money to undertake – for a few wands more in a better pattern, anti-social driver behaviour and the need for enforcement could be very cheaply designed out.

Now that TNI has established the Cycling Unit’s principle of protecting cycleways in areas of high parking demand with wands, this aberration needs to be addressed urgently.

Or does that request contain a terribly naive assumption? 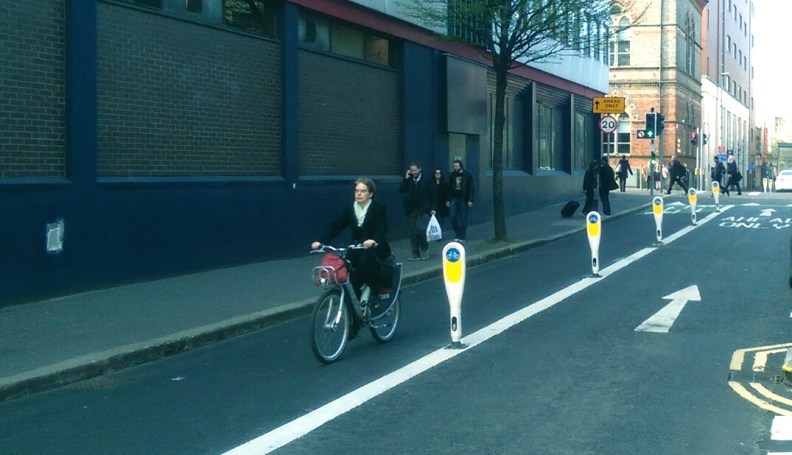 For one final observation poses an interesting question of TNI cultural resistance to cycling.

In an area where TNI wanted to specifically exclude access for vehicles (the Victoria Street footway) wands were installed in a tight pattern with gaps of roughly 1.5 metres.

Meanwhile, in an area where people cycling asked, through public consultation, to be protected from vehicle incursions (the Alfred Street cycleway) wands have only been installed at 6 metre gaps, wide enough for cars to slide through.

Protected cycle track update: reality and @deptinfra not seeing eye-to-eye on this one 😉 #Belfast pic.twitter.com/eTgPAHqdfY

Does this betray the whispered notion that elements within TNI see ‘protected’ cycling space as fair game for vehicles to share? That vehicle access is seen as acceptable and positively encouraged by design?

That the desire for handy parking by one driver should outweigh the safety of many people travelling by bicycle? It’s not a great foundation for a cycling revolution..

2 cars and a van parked in the cycle lane on Victoria street @nigreenways pic.twitter.com/pHBzEVNq6w

Told him he was blocking a #cycle path, got told he's gonna break my 'fu**ing neck' @nigreenways / oh #Belfast … pic.twitter.com/yEy0yW6sOq

2 Replies to “Getting on the wrong side of cyclists”