The Sirocco Skyway is a proposal to create an iconic elevated traffic-free pathway across the city skyline of Belfast. As part of the Restitching Belfast series, we look at creating a new route to link Central Station with Titanic Quarter and directly connect the Comber and Connswater Greenways with the city centre.

The main access point would be from the bridge, opposite the entrance to Central Station, opening out into a wide pathway along the right hand (east) side of the railway line.

The path would sweep down on a gentle gradient to the existing car park beside the railway, and around the back of the pumping station on May’s Meadow.

Utilising the existing parapets of the railway bridge, the Skyway can be suspended over Laganbank Road to the river’s edge near El Divino nightclub, and then over the Lagan. A similar set-up currently exists on the other side of the bridge with a well-lit pedestrian walkway linking the two riverbanks. 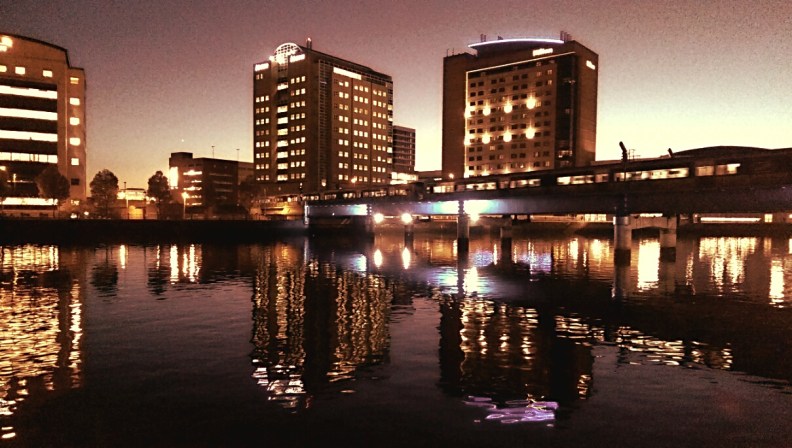 Sunset over the Central railway bridge and possible Skyway

Crossing the Lagan hugging tight to the railway bridge, the Skyway would cross the red brick boundary wall of the Sirocco Works site.

The former Sirocco Works stood on this site from the 1880s and the industrial machinery developed here included the world’s first air conditioning systems. The now derelict Sirocco site has been in various stages of planned development over the last decade, with the economic downturn scuppering the advanced “Sirocco Quays” plan:

“Plans for the waterside development included 5,000 apartments, a hotel, an international convention centre, a supermarket, leisure facilities and other retail sites.”

The site has recently been taken over by new owners. Belfast City Council are working on an “East Bank Framework” which has this area in its scope. 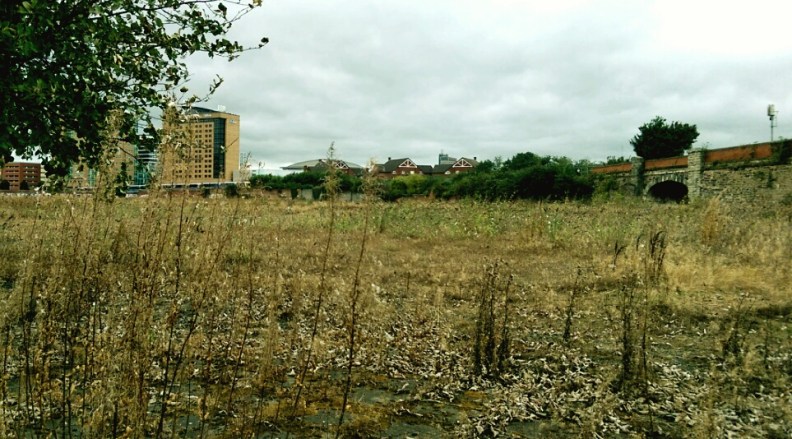 It’s an ideal time for public and private bodies to embed the Skyway concept as a high profile traffic-free access to benefit (and attract) users of the site.

While this is primarily envisaged as a functional commuter and access route, the addition of a major private development on the route offers possibilities for a New York Highline-style public realm enhancement along the Sirocco Works section – as well as the benefit of costs shared between the public and private sectors.

Towards Titanic and the greenways

While the river and the Sirocco site pose formidable barriers to attempting this direction of journey at present, the massive Bridge End gyratory junction also presents a woeful environment. The Skyway proposal would simply glide over these multi-lane racetracks. 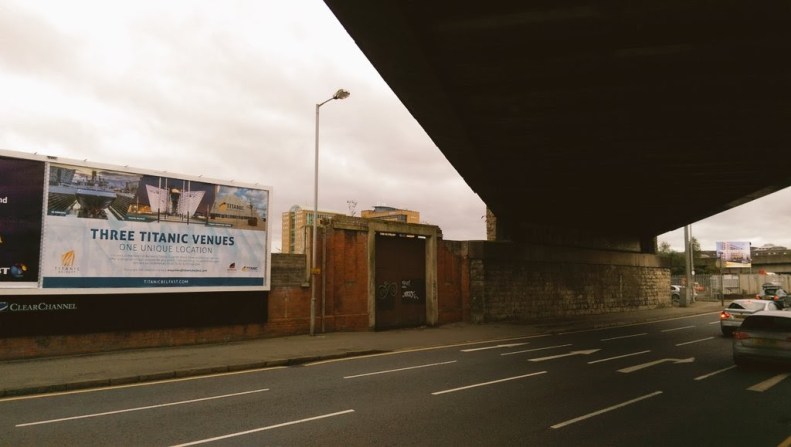 Passing across Bridge End at the first railway bridge, the elevated pathway would need to carry over the service station while clinging to the railway line. 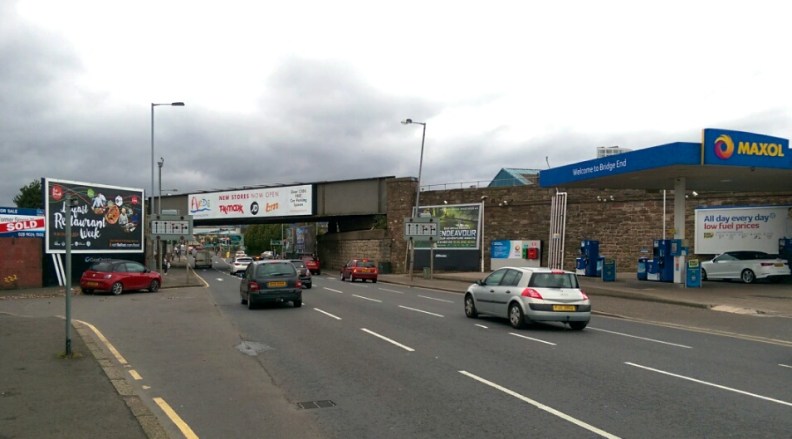 Behind this, the Eastside Park and Ride site would greatly benefit from excellent pedestrian access for passengers using Central and Titanic Quarter stations. 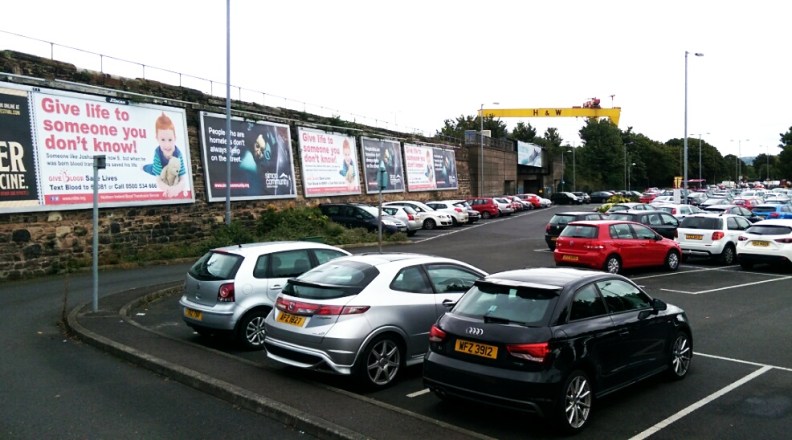 It would also link in with the Middlepath Street Cycleway due to be installed in early 2017. Flying over Middlepath Street, the Skyway would fall gently down to meet the existing (and recently upgraded) access path to Titanic Quarter Station.

Sirocco Skyway descends from the bridge over Middlepath Street

Onward cycling trips would utilise the station underpass into Island Street which, with upgraded traffic calming, would lead directly to the Comber Greenway at Dee Street.

This would complete a high-quality link to the convergence of the Comber and Connswater greenways at CS Lewis Square, with its new Belfast Bikes station pointing to a future where cycling is more critical to inner city travel.

The Skyway plan offers a chance to create a fully traffic-free interchange at East Bridge Street. The recently announced £2.6 million funding for the Lanyon Tunnels project is a major boost to the Markets area. The derelict and fenced-off archways under East Bridge Street will be redeveloped into a crèche, an employment education and training club, community space, cafe and health and fitness facility.

View to Lanyon Place and River Lagan through the Lanyon Tunnels

“Although not in use for over 70 years, the tunnels are an important part of Belfast’s commercial heritage and were originally used by cattle traders as holding pens for cattle on their way to the slaughterhouse in nearby Stewart Street.”

Included in the plan is an access tunnel to link the Markets with the Lagan. Bringing an access ramp down to the western side of the railway line would enable direct traffic-free journeys from the Markets into Titanic Quarter and on to the Comber and Connswater greenways.

This is even more critical with the go-ahead for a £55 million office development on the brownfield site between Central Station and Stewart Street. Providing the best possible incentives for the expected 2,500 workers on this site to cycle to work can help to mitigate further parking and traffic issues which have blighted this area for years.

Main path over car park, access paths through Lanyon Tunnels either side of railway

Another (eastern) access path down to the existing street which runs through to Central Station would enable fast access to the new Concentrix and Allstate offices under construction at May’s Meadow, and on to the Laganside path heading towards the Gasworks and Ormeau.

This development of a fast cycling commuter route (just one controlled crossing in the 2.6km between Oxford Street and CS Lewis Square) would need the additional support of dedicated cycling space on the run to the top of East Bridge Street.

All I want for Xmas is a new cycle route along Belfast's East Bridge St instead of lampposts, trees, bins & parking pic.twitter.com/QmjFMwwe7y

This would provide relief to safely by-pass the hideous traffic which regularly snarls along this stretch, tipping the balance further towards cycle commuting as an attractive option. It’s also another essential step to widen the city’s cycling demographic.

East Bridge Street at rush hour tonight – in desperate need of a cycleway to bypass this mess quicker and safer than we already can pic.twitter.com/3fd982FLGV

The necessity for dedicated cycle space here will only be increased by Bus Rapid Transit which will run along East Bridge Street from 2018. Unravelling bicycles and ‘rapid’ buses on a tough hill for the infrequent cyclist makes sense. Even now many people take to the footway to safely avoid standing traffic, putting strain on a space filled with people hurrying to catch the train.

The Sirocco Skyway vision brings together a stunning view of the Belfast skyline with genuine possibilities for modal shift linking three of the fastest developing commercial and residential areas of Belfast – Titanic, East Bank and May’s Meadow. A partnership between Belfast City Council, the Department for Infrastructure, Translink, private developers and communities in the Lower Newtownards Road, Short Strand and The Markets could deliver an excellent facility which the whole city could be proud of – and in a very short time.

What do you think of the idea of a Sirocco Skyway? Would it make a difference to your journeys around the city? Let us know in the comments below and share the article on social media.

Amended article 5th Dec 2016: in the original article it was incorrectly stated that Arup are working on a development plan for the new owners of the Sircocco site. In fact, Arup are leading the development of the East Bank Framework for Belfast City Council.